You know when you see a book in the charity shop that you have wanted read but haven't got round to buying and it is only 99p? 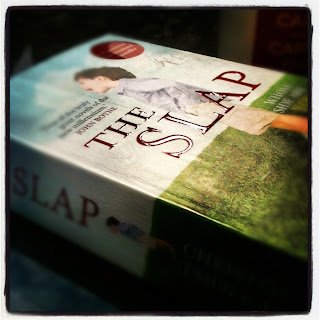 The PR spin machine had been running at almost 6000 revs on The Slap by Christos Tsiolkas, particularly in the parenting circles, because of it's controversial story line. A man slaps a child in public. The child isn't his. I was sucked in and was excited to read it.

I expected an addictive thrilling ride, through emotional torment, character assignations, tears even. I didn't get that. Instead I got a slow meander through boring repetitive 'plot' development, a seeping, creeping plod. I did like that each section focuses on one of the characters, I would say main characters but we drift off with peripheral characters too that don't really do anything for the story or for me. Problem was, I just couldn't connect with any of them. Some you should loath, some you should feel pity for, but mostly I felt ambivalent.

I kept turning the pages, hopeful for a reprieve, a revelation but it didn't come. Frankly I just wanted to slap it!

Now you really must get yourselves over to MummyBarrow because she has started up a book club for which this is the first book. If you've read The Slap, add your thoughts either here on my blog or on MummyBarrows blog and join in. The August book for the club is The Man Who Climbed Out Of A Window And Disappeared by Jonas Jonasson.