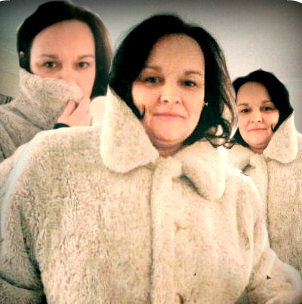 Have you ever been mistaken for someone else?
Has anyone ever told you that you have a doppelganger?

I spotted two twitter friends in the crowd while I watched the Olympics closing ceremony yesterday on TV. Unlikely I know given that the crowd was about 80,00 strong. And even more unlikely it turns out, given they weren't even there!

Anyway, this reminded me of an incident in London many years ago. It was lunchtime and so, not surprisingly I went in search of a sandwich. I had my favourite hangouts but on this occasion I decided to try out a new cafe that had recently opened. I went in and as I queued eyeing up the array of breads and fillings, I became aware that the guy who was serving was looking at me in a slightly unnerving way. I did what anyone would, and pretended I wasn't really trying to see if he was still looking. He was.

I was trying to decide whether he was looking at me because I was gorgeousness personified or because I had bird poo on my shoulder, when he cracked open a huge smile and leant across the counter to give me a kiss on the cheek, asking "How are you? God, it's great to see you. How have you been?"

Slightly taken aback by the gushing customer service, I believe I mumbled something along the lines of "Fine, thanks. Can I have ham salad mayo on brown please?" but he was not to be deterred. He said how well I looked, admired my 'new' haircut and asked about my 'brother'?

At some point  in the stream of questions, perhaps given away by the look of shock/fear/disbelief on my face, a look of realisation dawned on him. "You're not Charlotte are you?"

After copious apologies and red faces he explained I was the spitting image of his friend, who he hadn't seen in a couple of years.

So turns out I had a doppelganger in West London. A small mischievious part of me wonders what would have happened if I had played along. How long would I have got away with it? Seconds? Minutes? Long enough to discover that Charlotte was in fact his ex and she had unceremoniously dumped him, while he held onto a hope that one day he would be the father of her children?

There's a plot for a book there people.

So Charlotte, if you are reading this, and have been mistaken for someone else, it was probably me. We should get together and freak people out!

Have you got any cases of mistaken identity? And did you play along?
Posted by Unknown