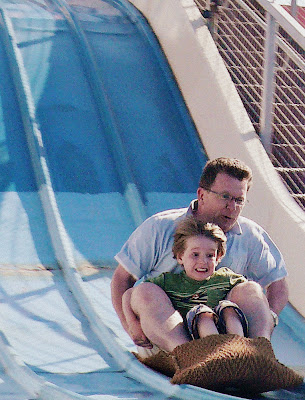 I could hear him squealing all the way down, not breathing, just one long continuous squeal. The shot I took was quite near the bottom, at maximum speed and maximum squeal. I think it is safe to assume that an intoxicating cocktail of fear/excitement/fear/excitement occurred through the course of the 7 seconds it took to get from the top of the slide to the bottom. You can tell by the corners of his mouth reaching his ears and his eyebrows meeting his hairline.

When we go back now, he takes the lonely walk up the thousands of steps by himself, takes a deep breath at the top and launches himself off. No squealing, just begging to have another go when he gets to the bottom.

Joining in with The Gallery and the prompt 'Emotions'.

Email ThisBlogThis!Share to TwitterShare to FacebookShare to Pinterest
Labels: emotions, slide, the big one, the gallery