As a child, I was always happiest if I had some paper and a pen. I would draw, scribble, doodle and colour. Oh to colour, with a rainbow of felt tip pens. That incredibly happy feeling I would get when I had new felt tips, the richness of the colour, the luxury of pouring colour on to the page without having to go over and over the same spot because the ink was drying out, trying to suck more ink through the mashed up point of the pen (yes, i did get a multicoloured tongue and it did taste vile, but I was an artist, and artists make sacrifices).

Actually, as it turned out, I wasn't an artist. I was remarkably average if truth be told. I probably hit my peak at about 13 and anything I attempted to draw on paper after that, still looked I had drawn it at 13.

But through the years I have yearned to reignite my 'talent' and purchased watercolours, oils, pastels in a misguided belief that perhaps my artistic career faltered at 13 because I just hadn't found the right medium. No. Still remarkably average.

The Big One was given an art project at school and wanted to draw a pyramid. This had also coincided with his newfound knowledge about shading. I remembered I had a box of pastels hidden at the back of a cupboard and I offered them to him to use.

I let him carry on. Those pastels are now his. The younger two children are not allowed to even breathe over them. His rule. Not mine.

I hope he will continue with his art. He loves it so much. It is the only thing that he concentrates on. He enjoys putting pen to paper as much as his Mum and even if it turns out that his talent peaks at 13 too, he will have enjoyed creating his master pieces. 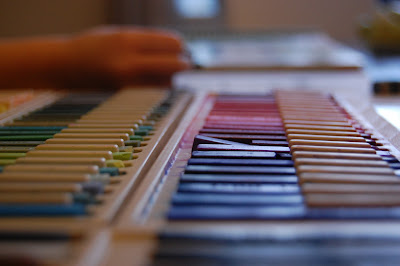 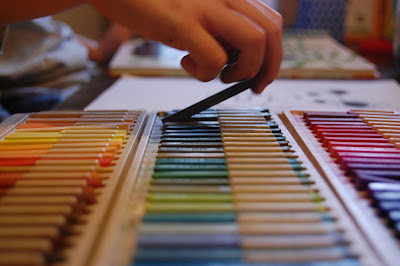 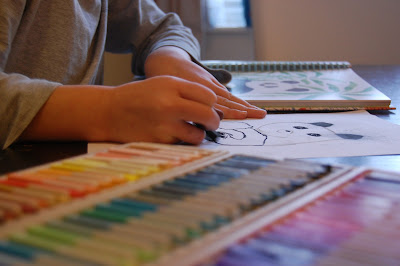 Incredibly, with all that colour at his disposal, he drew a panda.

Email ThisBlogThis!Share to TwitterShare to FacebookShare to Pinterest
Labels: art, talent, the big one