I could tell you but then... 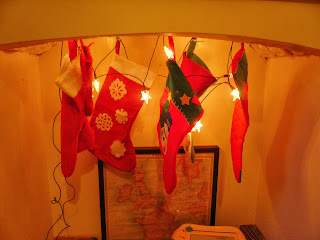 Not exactly in the spirit of Christmas you might be thinking but when it comes to hiding the Christmas presents my lips are sealed. Over the years, my hiding places have had to evolve into ever more cunning and elaborate cubby holes, evolve at a pace faster than my eldest child's imagination and ingenuity.

The back of the wardrobe is no longer safe, not even under the shoes boxes containing the heels that I can no longer wear without fear of falling or blisters.

Under the bed is a favourite hiding place, for children that is. Hide and seek sees them fighting over who can squeeze between the occasionally used suitcases and my stash of crafting goodies.

The loft has potential but the sound of a ladder being extended and the delicate footsteps of Santa's reindeer on the ceiling may just be too much for a three year old to bear at midnight on Christmas Eve.

The garage? Would definitely be an excellent hiding place. As long as I left a trail of glitter. I still haven't found the crabbing buckets I started looking for in July.

We do have a shed and I know for a fact that they would never think of looking in there. Not because it wouldn't occur to them but because of the family of spiders that have taken up residence. I may put up some Christmas stockings in the shed for the spiders actually. If I wasn't scared of the arachnids myself I would definitely use the shed to hide the presents.

I have had a dry run with the Big One's birthday presents in the back of the Mr's wardrobe. Hah! He so didn't think of looking there but then he spotted me putting something away and wouldn't let it lie. Twenty minutes of grilling and me sitting in front of the wardrobe doors later I admitted defeat and removed the 'something' and handed it over. He was less than impressed with the Argyle socks I've bought for Dad for Christmas, but at least he stopped his nagging.

So where oh where will I hide his satsuma, bag of chocolate coins and rubber ball?

Right in full view, in the toe of his stocking in the fireplace, to taunt him and teach him a lesson.

And should Santa deem that he has been well enough behaved over the last 12 months to grant him a Christmas gift, then he can keep it tucked away in his grotto with all the other presents until Christmas Eve when he can hand deliver it down the chimney. Because he still believes, and long may that remain so ;-)


This post is an entry into the Hudl Christmas cheer competition.

Email ThisBlogThis!Share to TwitterShare to FacebookShare to Pinterest
Labels: christmas