I can't quite believe it but, yes, *checks calendar* I think we may have survived the school holidays.

And, *double checks calendar* it seems to have gone bloomin' fast.

Okay there was a week in the middle there, when we had cabin fever and there was a potentially large risk of developing a wee drinking problem (Me that is. Not the kids), but all in all it wasn't that bad. Even my Mummy Mojo made a brief appearance, sufficient to get through dull, wet, long, boring days, of which there were a few. But the fact that the last 2 weeks of the holiday were packed with visitors and Daddy was home so we could get away, was a fantastic finish to the summer, running on beaches, drinking with friends and eating lovely grub.

So here it is, the last week on the holidays and the point at which I have to find something else to write about!

Day 36: Lunch with Grandma at Strada was a bit of a wrestling match with the Wee One. Little houdini managed to climb out of the highchair despite a harness and had me eating my scallop risotto one handed through much of it. Only ice cream captured his attention sufficiently to sit still for more than 30 seconds. One bowl of ice cream later and normal houdini-ness was back in force. I think the waitress found it the most irritating. Tripping over a toddler with a tray of drinks was probably not the highlight of her day.

Day 37: A low flying Lancaster bomber passed over our garden. Not an everyday accurance so it got me wondering what it was doing there, and then I remembered that there was the annual Stamford Car Fair in town. So we toddled off to have a gander at some rather gorgeous cars. The Big One was rather taken with the long line of Ferraris whereas I prefered the 50's 60's and 70's classics like Cadillac, Camper Vans and a particularly lovely E-type. Ill-prepared as I was, I forgot my camera and my phone battery died half way round so next year I'll be getting there a bit earlier with a full compliment of photography equipment and batteries. 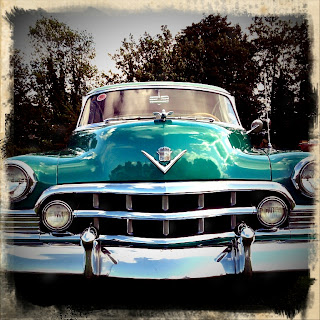 Day 38: Well we couldn't have a week go by and not go to Burghley now could we? I really ought to read the local paper because if I had, I would have known about the Car Fair and I would have also known about the Fine Foods Fair at Burghley and not bothered making dull tuna sandwiches when we could have enjoyed some lovely sausages and burgers from some of our local farms. The aromas drifting from their stalls was pretty darn good but instead we went for a couple of icecream cupcakes from the Stamford Cupcake Company. A quick jaunt around the Sculpture gardens and a dipping of the toes into the water gardens and a lovely day was had by all. 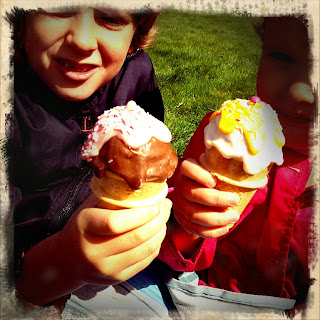 Day 39: Now the Big One is a bit of a Cars fan so when we heard that Cars 2 was coming out this summer he was rather excited. Today was the big day and Daddy took him to see it at the Stamford Arts Centre. Two hours later and Daddy passed it off with a noncommital shrug whereas the Big One thought it rocked. The highlight apparently was when Mater blew raspberry's at the baddies.

Day 40: Whoo Hoo. Norfolk here we come. My parents live in Hunstanton so we took them up on their offer of staying for a couple of days and using their house as a base for day trips further along the North Norfolk coast, a particular family favourite. To be honest we would have prefered to have stayed somewhere on our own but beggars and all that so Hunstanton it was. We got there in time to have lunch at the Jolly Sailors in Brancastor which is just lovely. They have a garden with a large climbing frame and slide for the kids, a pizza oven and a generally nice menu. 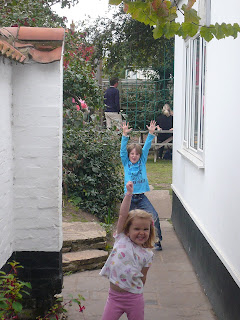 With full tummies we hit the beach there and had acres of space to run around in. It was low tide and the sea was about a mile out but there are enough creeks to paddle in to feel like you are dipping a toe in the sea. Sand dunes behind you and a vast beach in front of you make for happy children. There is a ship wreck on the beach which I thought I would wander out to see. the Mr said that it would take 30 minutes to get there and I would have to cross a creek, but undetered I headed off. The *ahem* creek was more like a river and not having brought a dingy I got no further than this: 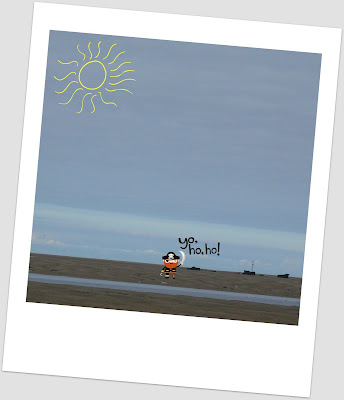 which did actually take about 30 minutes. But with the fresh sea air and the sun on my face it was pretty darn nice.

Day 41: A stroll with the dog in the morning landed us at Boston Square Sensory Garden. A little hidden gem that in the height of summer would have looked stunning. As it was, it was still very pretty. 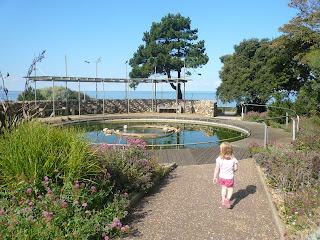 We packed a picnic and headed for Well-Next-The-Sea which, from previous visits I remembered as being another lovely beach. Disappointingly (it was now September after all) the wind was a tad brisk. Sheltered behind a groyne, we huddled up and watch braver souls having a paddle. The Wee One, oblivious to the wind, just wanted to get wet so we let him run around until his teeth chattered and then went home for fish and chips. 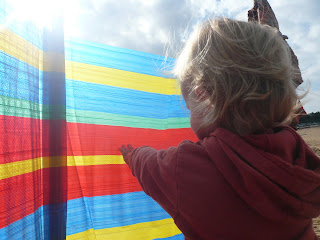 Day 42: After a round of crazy golf and icecream in Sunny Hunny, we decided to go back to Brancaster. I suppose, given it was a sunny day and the wind had died down and it was a Friday and the last weekend of the Summer Holidays, we should have expected more people. Surprise! More people. But Brancaster beach at low tide is big enough to accomodate huge crowds so we still managed to find a spot to claim as our own. It may have been tiredness, it may have been because we had to trek further to get a spot, it may have been because we knew we were going home that evening, but it was not quite the joyful, carefree afternoon I had envisaged. Instead we were the family from hell and I'm sure I heard applause when we left. 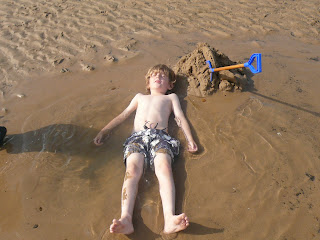 Day 43: This weekend we were house guests of friends in Hitchin. Having just written a post about house guests I was determined that we should be helpful, good company and not in the least bit demanding. Our hostess is a testimony in how to relax when you have guests, effortlessly accommodating young children, and whipping up nibbles with not even a hint of a sigh. We relaxed and had a lovely afternoon and evening, drinking too much and having a splendid time. We have missed our friends. 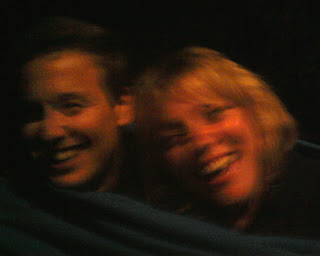 Day 44: The remaining dribble of vodka in the bottle was a sorrowful reminder of why we felt so crap. I had to return to bed after my 'breakfast' of flat coke and the Mr had 3 (count them) attempts at staying vertical. Not even a gorgeous Sunday roast was enough to rouse him. Oh well, the price you pay.

And that, dear readers is the last installment of our Great Summer Holiday Challenge.

We thank you x