How not to have a perfect family afternoon on the beach, and other helpful holiday tips. 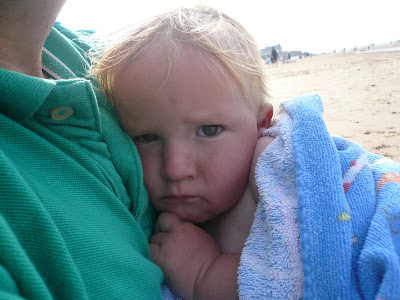 Rarely do I feel the red-faced burning embarassment that I felt recently on Brancaster Beach.

The last time was on a return flight from Barcelona with the Big One at about 6 months old. He started screaming as soon as the fasten seat belt sign was illuminated. I assumed it was a reaction to changing air pressure, and having read the books, I knew the best thing to do was feed him. I tried a bottle at first which he had just started taking, but when his thrashing about became a little too violent, I switched to breast foolishly believing he would settle down. Several bruises and bite wounds later a fellow passenger offered boiled sweets.

Erm, thanks but he is a bit too young.

As we landed, he quietened down nuzzling against my neck ready for a little doze. Great timing buddy. Have you ever tried to get out of a plane holding a baby whilst trying not to wake him? Screaming all through baggage claim and to the bus stop to get our car was the longest walk ever. Again he just settled down as we were about to get on the bus. Predictably the screaming started again.

At this point I was beyond embarrassment. Or so I thought. A lady on the bus said, "Were you just on the Barcelona flight?" A weak nod from me. "Yes, I thought I recognised the screaming." Cringe.

As we got out the car with all the bags, wind breaks, towels, buckets, spades, fishing nets, picnic, I asked, "Does anyone need the loo?"

Having spotted the toilets just by the car park and knowing we would have a trek to find somewhere to sit I thought it would be a good idea to get that little job out of the way.

A 15 minute hike later we settle down and start erecting wind breaks, laying picnic blankets, unpacking picnic and the Big One says, (you so know what's coming dont you?) "I need a wee".

I should have conceeded but my blood was already boiling because the Big One should have gone before, so I stupidly (stubbornly) decided that the Princess was going to the toilet and nothing, but nothing, was going to stop that happening.

I took her hand and tried to steer her in the right direction.

At this point I remembered how easily sound travels across that beach. Glancing at other families nearby, I realised we were fast becoming a spectacle.

"Princess. Come with me now."
"NOOOOOOOOOOOO"

Considering what would be more embarrassing and making the wrong decision, I passed the opportunity of giving in and looking like a mother who had no control over her children, to instead, looking like a screaming fishwife Mother who had no control over her children. I physically picked her up, and yes, she was upside down for a little bit, and manhandled her across several hundred yards of peaceful, playful, family smothered beach with her screaming all the way. Yes heads turned, fingers were pointed and visions of social services turning up were at the forefront of my mind. I prayed she would actually scream "No MUMMY" so that observers would know that I wasn't abducting a little girl from the beach.

And no, she didn't have a wee when we got there.


On the way back, we passed another family. They were sipping Rose wine from glasses. They were playing boules. They were running through the shallow water laughing and splashing. They were the perfect Boden family. I was expecting the director to step out and say "Can we try that again, ladies and gentlemen" and makeup ladies and hairdressers would step out and adjust their perfectly tousled sun-bleached blonde hair and I wanted to weep. George and Henry and Fruitella and Nutella (as I christened them) wouldn't scream or shout or stamp their feet or embarrass Mama or Papa. I studied my feet on the walk back to our spot.

The next spectacle (you didn't honestly think there would be only one did you?) was trying to invite/cajol the Wee One out of the water having failed to dress him appropriately in anything even remotely resembling beach attire. His nornal nappy swelled to the size of a small infaltable whale, his shorts drooped sorrowfully round his ankles and his t-shirt would be best thrown in the bin. Much screaming later (and I mean much, like 15 minutes of full on toddler tantrum on a quiet beach so the sound is magnified 10 fold) we undressed him and partially reclothed him just a sweatshirt lest he should suffer hypothermia.

I hid behind the windbreak shamefaced and mortified at how loud and screamy my family was, wondering how we had got to this stage? Repentent and stunned at my stupidity for being so darn stubborn, I vowed to relax and let the urchins run and be free and if they needed a wee, well so be it. If they ran into the water fully clothed, to provide warm clothing only when their lips went blue.

And then the Wee One did a poo, on the sand, in front of the Boden catalogue family. And I shreaked (out loud) "Oh no, he's having a sh*t".

We went home soon after.

And if you happened to be there, sorry for disturbing your afternoon.
Posted by Unknown