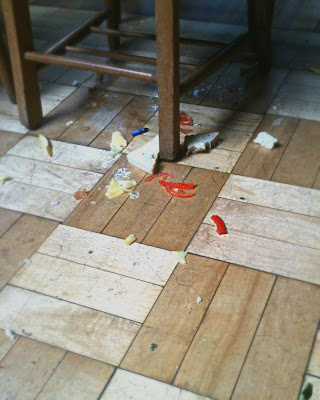 In the first instance, I would have been picking bits up as they fell. Who wants mushed food on the soles of their shoes? In the second instance I would pick up the worst of it with a napkin. There is absolutely no way I could stand up, brush myself and my child off (adding to the carnage that was lunch on the floor) and walk away.

But the two mums and their two children who sat at the table next to us did exactly that this week.

I think I may have gawped as they walked away. I was embarrassed for them. Then I was apologetic to the waiter who came to our table, on behalf of the rest of mothers who would have made an attempt to clear it up. I think to have left this kind of mess is just plain rude and arrogant. Yes you are paying to be waited on. But who do you think you are? For goodness sake, get some manners and show some respect!

Apologies to the Mr who I may have slightly embarrassed as I took this picture and apologies for the rant, but occasionally you just have to let off some steam.