Didn't we have a lovely time the day we went to ... Hunstanton.


We visit Hunstanton regularly. We know every inch of the sand and every ice cream stall along the promenade. And we love Wiley, the Wash Monster. Particularly his shark-like grin. 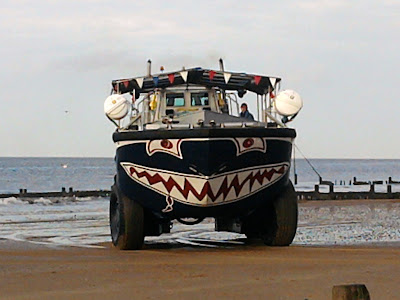 He is an amphibious vehicle driving up to the wall to collect passengers and then driving into the sea to chug along the coast. He is amazing and really captures the children's imagination. As yet we haven't been for a ride. Small children and water are not a great combination and until the Wee One is bigger we wont go. But to be honest, the excitement is seeing him rise out of the water and drive up the beach. If you were sat on his deck you wouldn't have the same view so I don't feel like we've missed out.

Next summer we will go for a ride. Definitely.

I'm joining in with the Stick Fingers Gallery theme of faces. Go over and say Hi.

Email ThisBlogThis!Share to TwitterShare to FacebookShare to Pinterest
Labels: norfolk, photography, the gallery