The Help - A Review

This is a guest post from the very lovely (and ever so slightly lippy ;-) ) Actually Mummy who was treated by Disney to a fab night at the movies courtesy of Britmums.


"Mummy has been treated well this week, and me and the Bug have been abandoned children yet again. Her blogging friend invited her to a glitzy film screening of "The Help" in London, but couldn’t go at the last minute* and gave both her tickets to Mummy. She tried to get another blogger to go with her, but for some reason none of them were free (maybe it’s her reputation for drinking and talking rubbish – I’ve told her people like to get a word in edgeways sometimes).


Nor could she get a babysitter to allow Daddy to accompany her. Do you know what she did? She made our regular babysitter (who could only manage until 7.30) rope in some of her friends for the later stints, engineering a kind of babysitting relay of girls we (and she) had never met! Off she trotted with never a backward glance for ‘pre-screening drinks’. Oh yes, I know where Mummy’s priorities lie! 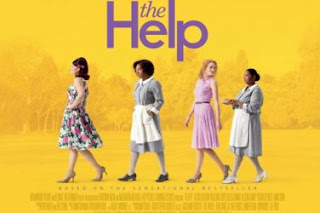 So, did she think the film was worth the weekend of reproach I have doled out? Well, she read Kathryn Stockett’s book a while ago, loved it, and has discussed it at her book club, so it wasn’t boding well. You know how it goes, love the book, hate the film and vice versa. (Although personally if they made a film of all 113…114….115…Rainbow Fairy books I would promise to love each and every one of them!).

Well, she came home happy, and it wasn’t just from the wine at the event. She says "The Help" is a great watch, although probably one to watch with the girls. Emma Stone as Skeeter was way more beautiful than depicted in the book, but was so engaging as the would-be journalist with a bee in her bonnet about the shoddy treatment of African-American maids at the hands of white homeowners in Mississippi during the 1960’s. Viola Davis shone with the dignity of Aibileen’s character in the book, but Mummy was surprised that Octavia Spencer as Minny was not as feisty as her literary counterpart. Even so, this is a great story, with some tears along the way, as well as a couple of wine-snorting moments of giggling. I would have liked to see that: 40 bloggers snorting wine must be an interesting sight! It seems that Mummy and Daddy had a great evening, and must surely owe Five Go Blogging a lovely treat sometime soon!

And how did our evening go? Pretty well, actually. We wound up our regular babysitter with the usual fun and games, and then conned the new girls into the belief that it is entirely normal to need warm milk and a packet of raisins an hour or two after going to bed!"


Thank you for the great review Actually Mummy. I hope daddy wasn't too bored and that the babysitters have recovered! I look forward to seeing Mummy very soon when it is highly possible more babysitters will be required!

*I'm still narked about that!
Posted by Unknown