'Controlled Crying' - also known as 'Rocking in a corner trying to resist the urge to go in and give him a huge cuddle'. 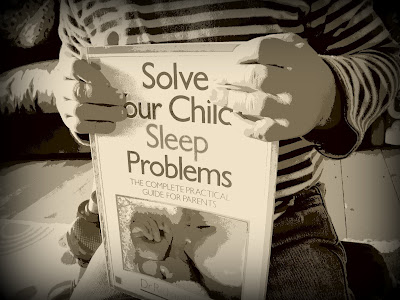 We have three children. With our first, who is a perfectly well adjusted 7 year old now, we used controlled crying twice. First when he was about 14 months old, I was returning to work and we hadn't had a full nights sleep since he had been born. He would have to be rocked to sleep and then would wake in the night, again needing to be rocked back to sleep. And another go when he got chicken pox at 2 and a half and completely forgot that he was supposed to sleep by himself.

On both occasions we took the same approach.


On both occasions this only took 3 nights. I was initially concerned he would wake up, resentful and grumpy but funnily enough he didn't harbor a grudge. He would wake in the morning happy and chatty with absolutely no after effects, aside from a snot encrusted cot sheet though!.

Our second child, the Princess, was much easier. We have rarely had a need to do this. But if we had, it was the same rules and one night before normal service was resumed.

The Wee One had been the easiest to settle at night until recently. Now, at 26 months, he is fighting going to bed. He has also dropped his naps. A coincidence? He would only settle if he was lying in our bed next to one of us and then we would put him to bed when he was asleep. Not entirely convenient and not good for a restful nights sleep.

So three nights ago we started controlled crying.

Night 1: I rocked on the edge of my bed a bit. I clock watched. But after only 45 minutes of hysterical screaming, he sobbed a final "Mummy", then went to sleep.
Night 2: Less rocking from me, mainly due to him settling to sleep after only 15 minutes.
Night 3: He was pointing to his cot saying "Bed. Bed". No tears. No protesting.

So we have cracked the going to bed issues. Yay! Go us! Parents rock!

Now we just need to crack the waking up at 2.00am issues!