A Cold Season by Alison Littlewood

Ah, Richard and Judy. How I love thee. I take your Book Club recommendations and devour them, safe in the knowledge that you know I don't have much time to choose books or even read these days (apart from toddler board books anyway). I trust you. And I want to read all of your books, ideally on an extended holiday, on a beach or by a pool, with a large G&T at my side and a bottle of factor 20. *snaps fingers* *wakes up*

So thank you WHSmith who answered my begging plea to join their review team for Spring's Book Club selection. It was a lucky dip kind of affair where I eagerly awaited a book shaped parcel to deposit itself on my mat. And sure enough "A Cold Season" by Alison Littlewood did just that. 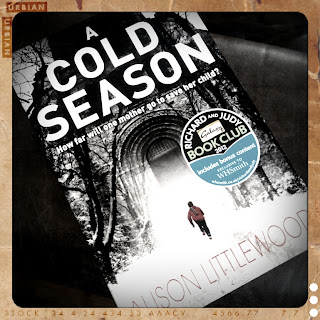 In essence, this is the story of a mother who has retreated to a remote village that was once her childhood home, to try to build a cocoon of safety around herself and her son after the loss of her husband in Afghanistan. Her need for the familiar and also desire to run away from her most recent life, seem to be in direct contradiction and cause the reader to challenge her decision, that and the frequent references to her unhappy relationship with her father, a vicar. As the strap line on the cover warns, it will not be plain sailing.

In fact if you've even managed to turn the first page before realising that her decision to retreat is probably a bad idea, you are clearly not reading the same book that I was. She moves into an old mill that has been newly converted into flats but she has yet to see any neighbours, her son keeps getting a haunted look in is eyes, other parents at the school seem less than normal and there's an old man with an ancient dog who warns her of ill winds. Oh yes, and then it snows a lot, so when she does realise that she may have made a bad move, there are no phones or open roads. Three guesses how this is going to turn out!

This book is an easy read given that it is a psychological thriller but I did expect more from the plot than I got. The cult undercurrent that ran through the story could have been developed more to give more thrills and unexpected twists but the potential remained unfulfilled in my opinion. The characters were uncomplicated and predictable, and were a bit short of redeeming features to be honest. It is a rare day when I don't recommend a book but today is Leap Day so there you go.

Out of five I would give it two. Sorry Richard and Judy but this one wouldn't even cut the mustard on a beach, after several G&Ts.